I can’t believe that it’s been less than two weeks since finding out I am pregnant with our second child.

On the other hand, it feels like an eternity until I have my first doctor’s appointment, which isn’t until June. When I was pregnant with Evan, my first appointment was at 8 weeks, and I was really shocked when I was told this time that they couldn’t fit me in until I am 10 weeks pregnant. Tick, tock! 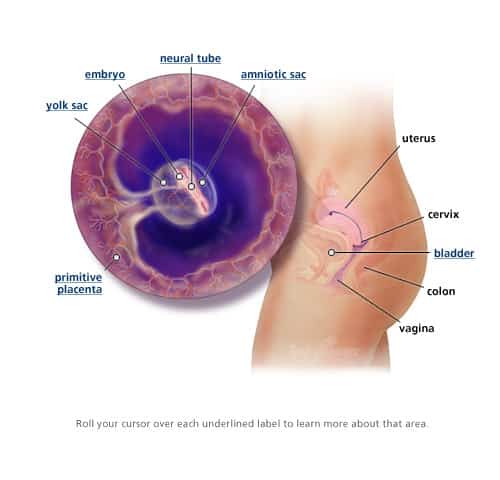 Deep in your uterus your embryo is growing at a furious pace. At this point, he’s about the size of a sesame seed, and he looks more like a tiny tadpole than a human. He’s now made up of three layers — the ectoderm, the mesoderm, and the endoderm — which will later form all of his organs and tissues. The neural tube — from which your baby’s brain, spinal cord, nerves, and backbone will sprout — is starting to develop in the top layer, called the ectoderm. This layer will also give rise to his skin, hair, nails, mammary and sweat glands, and tooth enamel.

My pregnancy symptoms at 5 weeks are really kicking in, and I must say, I am a little afraid of what the weeks to come have in store for me. The nausea comes in waves now throughout the day, and I’ve started to have the first hints of heartburn starting.

Nausea and heartburn were my two main problems during my first pregnancy, and it wasn’t just a little. My sickness and severe heartburn were completely debilitating at times, and I am just hoping that maybe it isn’t quite as bad this time around. Hoping!

Anyone have ideas to help me pass the time until my first U/S? It will be here before I know it… right?