If I had to come up with the most frequently asked question I receive as a mother raising a baby boy, I would have to say it’s this one: “Has he peed on you yet?”

Why yes, he has peed on me. He has peed on me in so many instances, and in so many creative ways, that I’ve considered adding: “Professional Pee Dodger” to the skills section on my resume. I’m not sure what kind of job that would qualify me for, and on further thought, I doubt it’s one I’d want.

The funny thing about having a little boy, is that no matter how prepared you think you are for the possible pee incident, there is almost always a GASP involved when it does happen. I can always tell when Evan has nailed his grandma because I hear a very familiar shriek, followed by laughter and her yelling: “He got me!”

The worst peescapade we’ve had was once when he actually peed on himself. I mean to say, he peed a perfectly arched stream that soaked his own face. I’m talking gasping, in the eyes, and up the nose. He was not thrilled, and it’s only funny to tell after the fact. 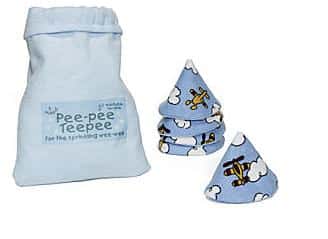 I have followed all of the advice offered by other mothers, including covering his junk with a baby wipe, putting a new diaper underneath an doing that crafty quick-slide trick in an effort to reduce the window of diaperlessness (which is questionably not a word), and I’ve even considered these ridiculous things: The Peepee Teepee for the Sprinkling WeeWee.

All in all, it’s no big deal. He’s a little boy, and he’s going to pee on me. It never fails that he usually pees all over everything right before we’re trying to go somewhere, or when I’m running particularly late, but that’s to be expected. I’ll take a pee cleanup over a poop blowout any day!

2 Comments on “On dodging pee”