Meet Louie – Our Elf on the Shelf

About two months ago, I posed a question to my Twitter friends. I asked them to tell me which Christmas books their children adore. I received several responses, but when one of my Twitter pals began telling me about The Elf on the Shelf, I knew immediately that I needed to do some more research on this book.

After spending about five minutes browsing The Elf on the Shelf website, I was placing my order, and soon enough a package arrived on our doorstep (from the North Pole, of course) containing a delightful book, and a cute yet undeniably borderline-creepy little elf. Our elf. Louie. 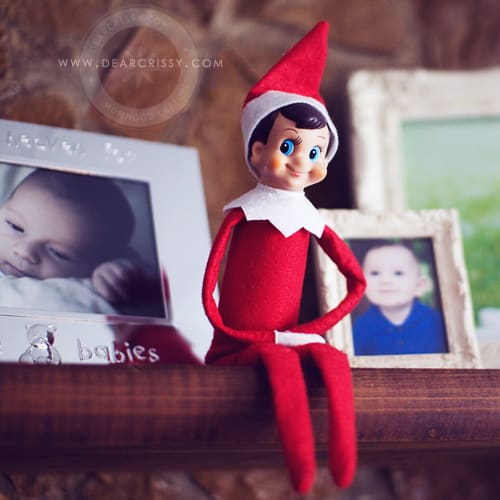 Did Mommy jump the gun on The Elf on the Shelf? Maybe. While Evan loves being read to, he doesn’t quite understand that this little toy should not be touched. I also feel a little guilty for choosing our elf’s name, when that was supposed to be my kid’s job. After two days of asking him what he wanted to name his elf, and being met with a blank stare, I chose a name that I knew he could pronounce perfectly. I have to admit, hearing him say “LOO-WEE” is just perfectly delicious, however, 9 times out of 10, he prefers saying, “Elf on Shelf! Elf on Shelf!” That works, too. Maybe he can just choose a name on his own next year!

THE ELF ON THE SHELF: SYNOPSIS

A Christmas Tradition is an activity the entire family will enjoy. Based on the tradition Carol Aebersold began with her family in the 1970s, this cleverly rhymed children’s book explains that Santa knows who is naughty and/or nice because he sends a scout elf to every home. During the holiday season, the elf watches children by day and reports to Santa each night. When children awake, the elf has returned from the North Pole and can be found hiding in a different location. This activity allows The Elf on the Shelf to become a delightful hide-and-seek game. 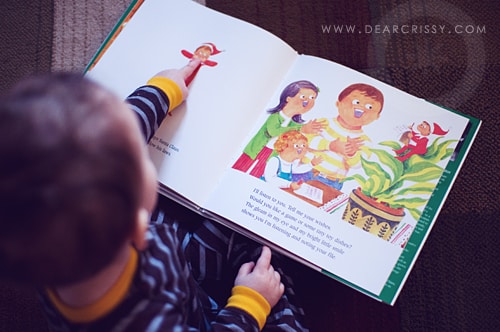 Personally, I think Louie is sweet. I love the book, and I am looking forward to continuing this tradition each holiday season. I can only imagine that the ritual will become quite fun when Evan is old enough to really understand the story. Believing in Santa Claus is one of the brightest memories from my childhood, and quite honestly, I can’t wait to fib like crazy to my kid about Santa, flying reindeer, and magical elves for years to come!

I also wanted to note, that I’ve seen some wonderful posts from other bloggers about The Elf on the Shelf this week. In one of my favorite posts, @ComplicatedMama shares 15 Fun Creative Ideas To Hide Your Elf On The Shelf.

ELf on the Shelf Names and Musings

@SthrnFairytale Ours is named Charlie—this is his second year. The magic, fun and joy is priceless.

@gingeranderson We got it when my son was a little young (2) so he named it “elf.” I’m hoping that’s not an indicator of his future creativity. ;)

@ccnoffi We do. Our soon to be 5 yo named our Gaston. I have no idea.

@AndreaMemenas Our elf is Spike. My son named it.

@burghbaby Alexis named our Elf Chrissy because *she* is a Christmas Elf. Of course. This kid has good taste!

@Mommycosm We have an elf named Murray.

@fantasticmomma We are doing Elf On The Shelf for the first time. My kids named him Roger.

@hooeycritic we just started it this year – named him watson. He’s creepy.

@KristiMaristi we have an elf. He creeps me out & sits there on the shelf for 2yrs now. We have never even opened the book that goes w/ it. <— kind of died laughing on this one.

Do you have an Elf on the Shelf? If not, which books are special for your family during the holiday season? Oh, and while we’re talking about Twitter, did you know that you can follow @ElfonShelf? Yep!

I highly recommend purchasing an The Elf on the Shelf for your little one this holiday season, it is truly a special and fun family tradition!

35 Comments on “Meet Louie – Our Elf on the Shelf”