I’ve been openly discussing the gender of our new baby on Twitter and Facebook for a week, however, I know that there are probably some folks who missed the gender announcement!

So, while I won’t make you read the whole story to get in on the big gender reveal, you should!

That said… we are having a little…. 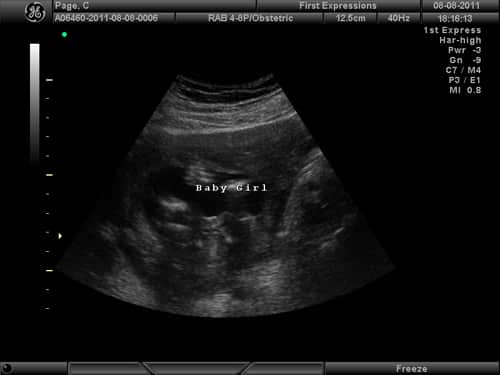 I honestly have no idea what I’m looking at here, but they tell me it spells girl. Boy ultrasounds are so much easier to read!

On August 2nd, I happily visited my OB for the mid-pregnancy anatomy scan. You know, the BIG ULTRASOUND, the one where you are supposed to walk out knowing if you’re having a little boy, or a little girl? Well, my husband and I walked out happy with the knowledge that baby looked healthy, however, his or her legs were crossed, obstructing a good read on the gender.

What we didn’t mention to anyone except my parents, was that while the ultrasound tech said repeatedly that she really couldn’t get a clear shot, she thought that maybe, just maybe, it was a girl. She even printed a photo showing what she thought was the vagina, and she typed “GIRL BABY” on the image. She then said she was 60% sure that it was a girl based on this quick glimpse, and said she would try again in a MONTH. SIXTY PERCENT? That’s not much better than what I could gleam from a coin flip!

I also couldn’t help but think about how funny it was going to be if the baby was a boy, and we had this “GIRL BABY” ultrasound photo to tease him with when he was old enough to face a little friendly family ridicule.

I was pretty disappointed. The next day I made some calls around Columbus to see if I could get an appointment at a 3d/4d elective ultrasound boutique. I was surprised to find that they are all far busier than what they were in 2009, and most places told me they were booked up for over a month! I was finally able to get an appointment last Monday at First Expressions in Columbus, and my dad volunteered to drive me up for the appointment (couldn’t risk another lost day of work for my husband.)

A second chance for baby to cooperate

As the ultrasound began, once again, I felt like I might be walking out of an office with zero satisfaction. The technician said that baby was breech, legs were crossed, and also that I have and anterior placenta which was going to affect the overall quality of 3d/4d images. Great! Then, she told me that she was pretty sure which gender our baby was, and she called in one of the other technicians to see if she could coax baby into a better position.

I would have been absolutely thrilled with a boy, or a girl, but, it was definitely exciting to find out. A girl! What a change… I am so accustomed to BOY!

Moms of girls, what can I expect?

35 Comments on “The official gender reveal!”